6 Reasons to Hire an Independent Contractor vs. a Full Time Employee 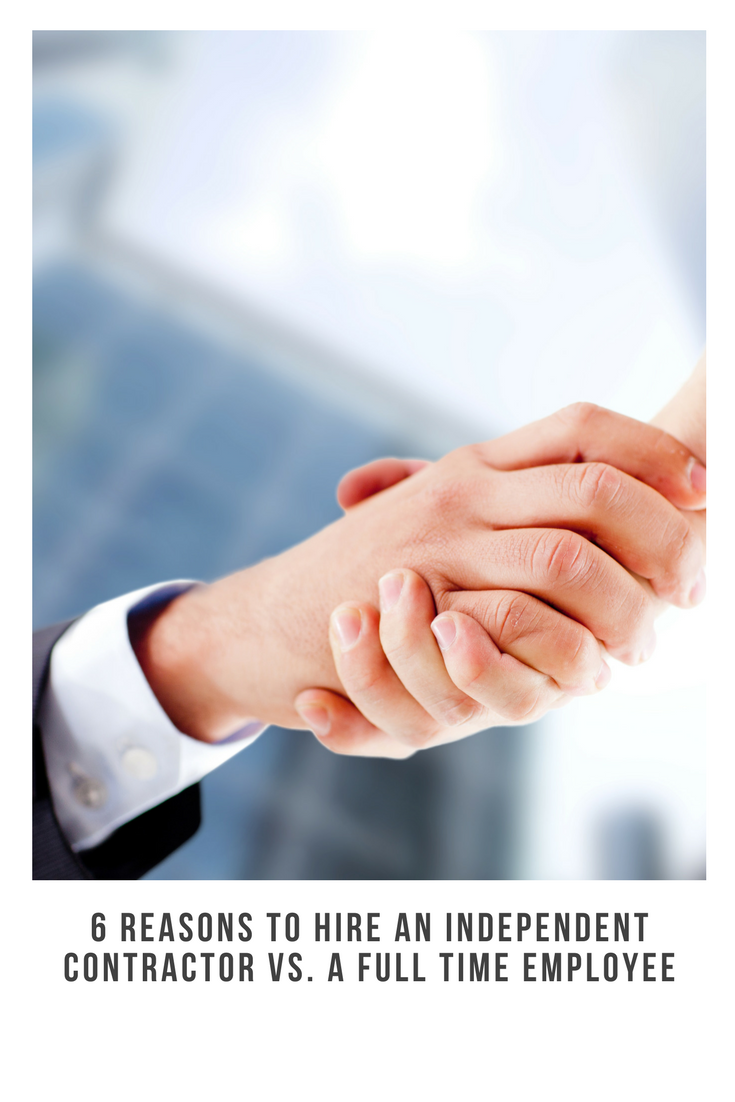 The freelance economy is starting to take over the American workforce. The latest figures reveal that 35% of the workforce is now made up of freelancers.

The reason for this is that independent contractors have a lot of advantages over full-time employees.

Here are the reasons why people are hiring independent contractors overtaking on full-time employees.

There’s nothing more problematic for a company than having a sudden influx of work and requiring extra hands. The problem is you won’t need a full-time employee beyond that initial six months.

With full-time employees, you can’t simply hire someone for a few months and fire them when you don’t need them anymore.

You Don’t have to Pay Employee Benefits

Did you know that 7.65% of an employee’s Social Security and Medicare taxes have to be covered by you?

Multiply this by the number of full-time employees you have and before you know it money is literally leaking out of your company.

Independent contractors are responsible for their own taxes and they don’t get the benefit of employer contributions. There’s no liability on your shoulders for these common benefits.

On your side of things you also don’t need to cover them through your insurance policies. Since they’re not classified as employees there’s no need to include them in your policy.

Your normal liability protection will be enough to protect you from legal action should something go wrong.

Another employee benefit you don’t have to pay is subsidiaries for transport. Some companies pay for this in the form of reimbursement for mileage when employees use their private vehicle for company business or by providing a company car.

Independent contractors are normally responsible for their own transport. Any reimbursement for transport is worked out during the hiring stage and is not necessarily a given.

Some estimates state that you could reduce your payroll by up to half simply by not having to pay for employee benefits.

Ridesharing company Uber made this mistake and 400,000 Uber drivers sued them because they were being classified as independent contractors. Uber was then forced to start treating its drivers as full-time employees.

Create a Tailored Agreement that Works for You

The beauty of hiring independent contractors over full-time employees is the way you can structure your contract of employment. You get to decide what goes into that contract, with the collaboration of the contractor.

The employer outlines what they need, and the independent contractor can work when they want from where they want as long as their deadlines are met.

No such flexibility exists with full-time employees. Duties are less defined, and you can’t use tools like payment milestones.

It’s not always easy to get rid of an employee who isn’t meeting your expectations. They could be part of a union or they could have a level of influence in the office that makes it hard to fire them without upsetting the rest of your workforce.

Long term employees who let standards slip are especially hard to get rid of without consequences.

Independent contractors can typically be hired or fired at will. If you’re not happy with their work, you can part from them without worrying about things like severance pay or the effect on morale at the office.

Choose from a Greater Range of Workers

Many companies are going further than hiring someone in their local area to come in for a specific project. They’re widening their search across the world.

Certain companies now have entire divisions of independent contractors who have never met each other before. The remote working revolution has taken hold.

With studies finding that workers who work remotely even 20% of the time are more engaged, this idea has been expanded to bring in more independent contractors.

Now businesses have an entire world to choose from and it’s giving them access to a much wider range of talent.

Independent contractors are a different breed of workers. They’re self-employed and if they don’t perform well they can lose their jobs and be left with nothing.

This constant pressure typically means that independent contractors are far more disciplined at what they do. They’re determined to do a good job because they’re aware of the immediate consequences of failing to do so.

Something else you need to know about independent contractors is that it’s becoming far more competitive. You need to be able to learn and to constantly advance your skills.

Ordinarily, an employer would be forced to pay for their employees to learn new skills. Plus, they would have to take time out of the office to be able to do it.

Not so with independent contractors who must do this through their own initiative to stay competitive.

Last Word – Why You Should Hire an Independent Contractor

You have a level of flexibility with independent contractors that you’re simply not going to get from a conventional employee. You get to decide how long you want to hire them for and what you want them to do.

There’s no need to cover any benefits or pay any taxes, which will drastically reduce the pressure on your payroll department.

Finally, hiring an independent contractor means that you’re gaining access to a disciplined and motivated professional who will do their best for you.

Do you believe that an independent contractor is right for your company?

Thank you for subscribing!

You will receive an email (at most once a week) with any new articles.

You can unsubscribe anytime with a link in the footer of the email.